I just finished reading Memory: Fragments of Modern History by Alison Winter. Simply, its a great book. My only problem was that I spent most of yesterday reading it when I had other stuff to do. I read about the book yesterday morning from a TLS review by Jonathan Sutton. In this web era, I read the review yesterday morning, bought the kindle book for about $5 a few minutes later and started reading within minutes. As noted, my day was redirected.

Sutton’s review is mixed and, I think, grossly unfair. “Memory” is about 250 pages long. A serious, complete, encyclopedic treatise on memory would be 10s of thousands of pages (I have one such book: Encyclopedia of Memory. Unreadable). What Alison Winter does, and what she says she is going to do, is take a few jumping off points and proceed. While these are clearly linked, they can be read as independent essays. I loved two of the topics (Penfield and Bartlett) and liked the rest. This is not because these two are better, but because I’m just not as interested in PTSD or childhood sexual abuse.

Some of the major themes:

memory: a picture-like trace or a construction? The ideas and history of this topic is woven throughout and beautifully presented.

historical concepts of memory using media as metaphor. When we speak of memory we all, sort of, have a shared conception of what we’re talking about. We also have the sense that if we were to speak with, say, Thomas Jefferson, we’d be using the same words. But maybe not. Jefferson had never seen a photograph or a movie. These snapshots or moving picture conceptions may not have been his concept of memory. Although paintings have been around through the ages, there are not many action shots in ancient artwork. Did the ancients have concepts of freeze-fame memory? If not, whose closer to the mark, them or us? Ms Winter deals with the concept of memory in the 20th century and introduces ideas of how early cinematographers were dealing with the question and the lessons they learned. 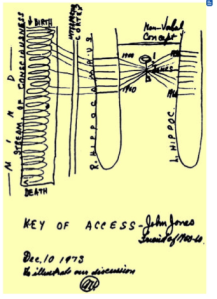 One additional note. A figure in the book is Penfield’s napkin sketch of memory. Although wrong on the permanent recording aspect, probably right in the middle, where the hippocampus acts like a look-up table (index)

Coverage of Penfield was fascinating. For example, Penfield believed that memories were permanantly recorded in the brain and he was able to release the stored record with gentle stimulation deep in the temporal lobe.

Below is a video of Penfield saying that memories are permanently recorded. From “Gateways to the Mind”, a Bell Television show in 1958. (I believe the director was Frank Capra; nifty 1950s effects; Bell labs production of high-quality science TV is another reason to mourn the passing of Bell labs).

In short, a really really good book. Get it. Read it.

6 thoughts on “Great Book on Memory”