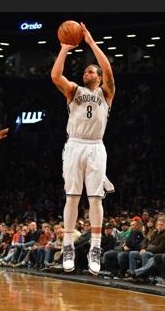 Yesterday evening Deron Williams drained 8-straight 3-point shots at the start of the Brooklyn Nets’ win against the Washinton Wizzards (Nets, my team!). He was ‘hot’. He was on a streak. He was in rhythm. As Deron said, at the end of the streak, “yeah, I was on a heat check”.

Was it a real streak? Was he hot? In synch? If there are streaks, what does that say about human athletic performance and neuroscience?

Stephen Gould addressed the question* of whether there are streaks in athletic performance 25 years ago in a lovely article in the NY Review of books (1988). Interestingly, Gould focused on two types of streaks: streak shooting in basketball, and Joe Dimaggio’s 56-game hitting streak. He summarized then current work by Arvin Tversky and Ed Purcell, using fairly simple probability techniques. Conclusion: from NBA shot statistics were there no evidence of “hot streaks” or “hot hands” in basketball; but the DiMaggio’s streak was truly unusual. I don’t have ready access to the background work (correction: Golovich et al, 1985**), nor more recent analysis, but I did a back-of-the envelope calculation this morning.

Devon Williams’ hot streak. If the probability of hitting a single 3-point shot is 0.4, then then starting a game, the likelihood of hitting 8-straight 3-point shots is 0.4^8 or about 1 in 1500. The likelihood, at the beginning of a given game, hitting 8-in-a-row is pretty small. But, given a career or NBA wide perspective, we would expect this type of thing to happen, on occasion. No clear evidence of a hot streak. 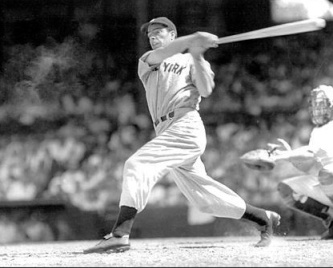 One additional caveat. Streaks are harder to come by than this estimate suggests. These estimates are based on the assumption that each basketball shot has equal probability and each day of baseball has equal probability. Actually, event-to-event variations in probability, even with identical average probability, lowers the likelihood of streaks. Large event-to-event variability lowers streak possibilities. A large and hard-to-quantify effect. So, for example, if Deron Williams is bumped on 25% of his 3-point shots, this makes streak likelihood lower.

Another computational approach is autocorrelation. Don’t know if this has been done, but it’s conceptually simple. Take a single-season batting record of a single batter in the major leagues, with about 500 at bats. In a spreadsheet column record each in series as 0 or 1. Copy the record (in excel) and shift down a frame so that n matches with n+1. Do a correlation between the n and n+1 columns. If the correlation is statistically above 0, then performance an at bat predicts performance on the next. If this works, continue the shift distance in subsequent columns (n-to-(n+2); n-to-(n+3); …). Make a plot of correlation as a function of shift, and you’ll have an estimate of how long streaks last for the analyzed player. (If I had the data, I’d do this).

This sounds somewhat pessimistic, but I’m confident that streaks exist. Certainly, there is a conscious bias in feeling that one is ‘on a roll’ or is watching a streak. But personal evidence seems overwhelming. For me, this is especially true in gaining mastery in a sport. When I play tennis (or try), there are times when shot-after-shot works, and times when shot-after-shot fails. And usually fails in the same way. Certainly part of this is the feeling of being on (or off) a roll. But its much more than that. One possibility is that streakiness is greater when acquiring a skill than after mastery. I’ll leave it at that. I feel that streakiness exists, especially during the acquisition of skill learning. I suspect that this is studied, and would like to know more about it.

Since the days of Nortbert Weiner’s cybernetics, its been assumed that motor learning works in a feedback control mode. A command signal emerges, performance feedback returns, an error signal is generated, and correction is applied to reduce the error signal. The correction can be within trial (for slowish execution) or across trials, with learning. For large errors, correction is fast, large and crude, for fine-grained corrections, corrections are smaller. This feedback control model is commonly applied to cerebellar motor learning. It can also be applied to basal ganglia and cerebral cortex. Each system, likely, provides a different type of control. For example, cerebellum may control muscle force generation, while basal ganglia may control timing and sequence of movements. Neocortex may be a conscious, strategic motivator (“more left, next shot”). Applying a control systems perspective  predicts streaks. Lets imagine a large error. You are driving (across the Verizanno Narrows Bridge) and a huge gust of wind makes you swerve off target. You turn the wheel in error control. Through a series of actions you swing back and forth, with each correction smaller than the last, until, after a second or two, we are back to a straight path. Feedback control takes time. Streakiness is a strong prediction.

A final question I’ll address, I feel the most interesting question is whether feedback control is continuous or discrete. Discrete: “there was an error of x,y in the last effort, subtract x,y in the next effort”

What about rhythm? Groove?

My strong suspicion is that continuous, oscillatory controls are the key. Rhythm.  For fascinating discussions about rhythms read Gyorgi Buzsaki’s book “Rhythms of the Brain” and Rudolpho Llinas’ book, “Eye of the Vortex“, which has greater emphasis on motor rhythms and cerebellum. The rough idea is that motor function rides on rhythmic processing, and efficient motor (athletic) performance is, roughly, related to harmonic entrainment of rhythms. You get optimal efficiency and power when a team of rowers stroke in synchrony. Perhaps the feeling of being “in synch” and in rhythm is finding entrainment with an optimal set of motor frequencies. Although ‘synch’ and rhythm may be hard to achieve, one found they can stay for awhile.

Finally, can a team be on a streak?

I’ll leave this as an open question. My guess: yes.

* Many thanks to Sam Wang. He helped, especially the SJ Gould reference. Wang seems to think that athletic streaks, generally, are imagined, not real. I’d like to further discuss cerebellum with him.

** thanks to Pascal Wallisch for the Gilovich, Valone and Tversky paper.