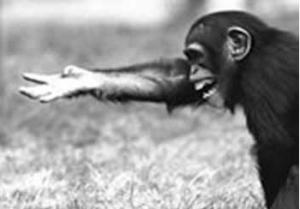 Today’s New York Times has an op-ed “The Moral Animal” written by Jonathan Sacks, an English rabbi and a member of the House of Lords. The take home message is that human morality is due to religion. There’s a lot wrong with the essay, especially the science it’s based on.
Let’s start with the science. Here is an extended quote:

Darwin himself suggested what is almost certainly the correct answer. He was puzzled by a phenomenon that seemed to contradict his most basic thesis, that natural selection should favor the ruthless. Altruists, who risk their lives for others, should therefore usually die before passing on their genes to the next generation. Yet all societies value altruism, and something similar can be found among social animals, from chimpanzees to dolphins to leafcutter ants.
Neuroscientists have shown how this works. We have mirror neurons that lead us to feel pain when we see others suffering. We are hard-wired for empathy. We are moral animals.

This is science at the level of Disney cartoons. Leaf-cutter ants have mirror neurons? Empathy? I doubt that’s what Darwin was thinking.
The scientific debate cited by rabbi Sacks is whether animal atruism is based on kin selection or group selection. The gist of this argument is that social animals have inborn rules that lead to altrusitic behavior, not that they deliberate about the feelings of others. The rules might be something like this: “if my queen bee is attacked, sting the attacker”. Even this statement is too antropomorphic. The rule may be a hard wired visual-motor response that never goes through a perceptual stage. But, whichever way you state it, empathy, or the thought of self-sacrifice, is not an essential part of the genetic decision making process. In brief the debate is about the biological biases that may affect moral decision making, but it not about morality. (the debate is whether the rule that is inherited protects kin or group members). 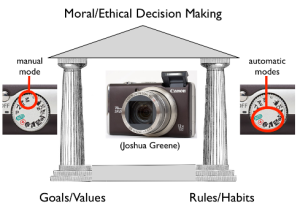 Moral Rules and Values
Rabbi Sacks also obscures the role of Danial Kahnman’s “Thinking Fast and Thinking Slow” in moral decision making. Rabbi Sachs considers “thinking fast’ as irrational and impulsive. This is an oversimplification. The psychologist/philosopher Josh Greene has refashioned the Kahnman idea, focusing on moral decision making, and analogizes decision making to a digital camera with two modes of operaration: automatic and manual. The automatic mode is Kahnman’s “thinging fast” and the manual mode is “thinking slow”. I like the dichotomy and use the terms “rule based’ and ‘deliberative’.
Rules
Let’s examine three processes that lead to rules:
So it is not the case that all rules are irrational; rational deliberation may led to the development of the rule. However, since rules are inflexible, it is critical is the rules be subject to a re-evaluation process.  Althogh rules are useful shortcuts, at some point in time, moral decisions must be based on deliberations concerning moral values.
Value-based decisions.
Rabbi Sachs and I agree that the ‘gold-standard’ for a moral decision is that it be based on rational evaluation of values. Here is what I think are our points of agreement.
Religion and Morality
Rabbi Sacks contends that religion leads to morality. The argument is weak. Religion is good at is promulgating rules. We’re familiar with the 10 commandments (and all of leviticus) In the crusades it was “kill the infidels’. In ethnic cleansing it is ‘kill the other’. In honor killings it is “kill my family member who has been made unclean”.
But, in many cases, religion has lead to a slow evoltion of moral values over time. I think the reason for this is that religions are cultural institutions. As cultural institutions, they can modify (learn) over extended time. The ideas that make up a religious institution are a set of evolving memes. Rather than each individual slowly thinking through moral dilemas and developing personal answers within a lifetime, the moral evolution of a religion can extend mellenia. In my reading, the old textament is largely an immoral text, based on commandents. Modern Judaism, however, is largely moral with decisions based on empathy and rationality rather than arbitrary rules. How has this transition occured? Over extended epochs, teachers of a culture can pass on more than rules; great teachers in a culture can pass on modes of thought and deliberation.
Rabbi Sacks ends with a final error. He contends that religions are moral institutions because they are group institutions. Religions herd individuals into communities, away from lives of isolation. This commual versus individual dichotomy is dangerous. Social animals, and social humans, can be immorally violent to the “outgroup”. While group membership is important in moral development, it is, at best, a half step. The historical record religion offers many counter examples. The common occurence has been gratuitous cruelty to the ‘outgroup’.
Conclusion
In brief, human morality is not a set of genes inherited from our altruistic animal ancestors. It is a hard-to-learn process of deliberation based on theory of mind, empathy and rational thought. The biological roots of pro-social behavior are important biases to consider. But morality is more than biology. And more than religion.
Religion is not essential to morality. Although religion can aid in the development of morality and its transmission across generations, it’s not unique in this role.  Secular institutions, such as governments and schools, can aid in the development of morality within a culture. Moreover, they can do this without demanding a belief in the supernatural.

2 thoughts on “A Moral Muddle: NY Times OpEd on Morality and Religion”