Enthusiastic and Excited response to the publication of “The entorhinal grid map is discretized” (Stensola, et al, Nature, 492, 72-78; 2012)

“fire” only when the rat crosses a restricted region of space. The figure below is an overhead-view map of the firing of a single place cell averaged over a 16-minute recording session (the animal was in a cylindrical enclosure; that’s why the map is round). John O;Keefe, followed by many others, has suggested that the collective firing of hippocampal place cells forms the rat’s “cognitive map”, and permits efficient navigation.

The grid cells of the entorhinal cortex were discovered by the Moser group within the past decade. Grid cells are similar to place cells in that they exhibit “location-specfic firing”. In other words, when you make a similar overhead map of the firing of a single grid cell it is coherent and organized. But the pattern is a kick-in-the head. Rather than a single hot spot, or a few apparently random hot spots, the firing bumps of grid cells are highly organized. The pattern of bumps look like a set of hexagons; formally, this is a triangular lattice.

In the decade since the discovery of grid cells two groups have made substantial contributions: The Moser group and a group headed by O’Keefe and Neil Burgess at University College, London. Three of the principal findings:

Let’s examine the place cell and grid cell maps, and make first-guesses about what information each conveys. The firing of the place cell appears to signal either “I am here” or “I am not there”. There is little or no information about distance and no information about direction. The grid cell is more complex. The “I am here” signal is extremely ambiguous. While there is spatial information, its not localized. But notice that when a grid cell fires it also signals that the rat is a certain direction and distance from another location that the same cell will fire. In a sense, the system knows that  if the rat moves a certain distance and direction, the cell will fire again. This suggests self-movement information, or displacement. Given the firing pattern of 20 grid cells in one location and the same 20 in another location, an intelligent system could decode the distance and direction displacement between these two locations. Or so we imagine. In other words, the firing properties of grid cells suggest a mechanism for 2d displacement metrics. The third finding listed above, that grid cells behave normally in the dark, suggests that a principal driver is self-motion and not external sensory cues.

Why is a modular Organization Important?

A “module” refers to a region of grid cells where all cells share identical grid scale and orientation. Above we said that grid cell scale increases from dorsal to ventral in the entorhinal cortex. The figure below illustrates the two possibilities: continuous and discrete-step — or modular — scaling.

The findings reported today by Stensola et al (The Entorhinal Grid Cell Map is Discretized)  indicate that the organization is modular.

In the section above I rather cavalierly suggested that a set of grid cells, rather than a single one, could calculate direction and distance displacement. Actually, the process is not so simple. In my consideration, the process is most readily done if broken into two parts:

If modular organization exists, it is very suggestive. One can imagine patterns of interconnection among the grid cells within a module that permit updating the animals location within the module as the rat moves from one grid bump to another. Another way of saying this is that the module is a processing unit that keeps a record of the rat’s phase (location) within the module by means of intra-modular processing. Although this is entirely speculative, the finding of clear modular organization makes this a likely possibility. Decoding processing within a module becomes a feasible project.

The figure below illustrates tight neuron-to-neuron interconnections within each module and looser connections across modules. 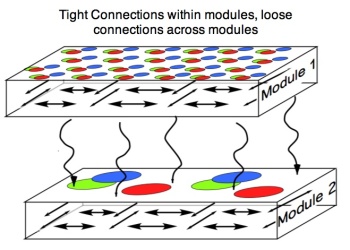 This brief introduction is insufficient to give the sense of the calculation. We also don’t know how neuronal computation could do the job, but we have some ideas. Andre Fenton and I published a model last year where some of our ideas about modular organization are developed (Linear look-ahead in Conjunctive Cells. An Entorhinal mechanism for vector-based Navigation). Take a look. (or here) The findings of Stensola et al support our model (we knew about the findings).  (Here’s a video illustrating the activity of a module as the rat traverses a large apparatus; it illustrates how a module tessellates across a large space).

Reconstructed Firing of Grid Cells in a Module as a rat traverses a large box.

The white rectangle center left is the phase distribution of the grid cells in the module. When a cell “fires” its color turns on (ignore the different colors). What you see is a cluster of active cells moving across the tile-representation of the module. The firing of the set of cells only signals the rat’s location within a ’tile’, not its location in broader space. On the right we see a representation of the larger apparatus; you see how the module ‘tesselates’ across available space, and how firing within a single module does not signal the rat’s global location. To do that would take multiple modules with different scale or orientation (Kubie and Fenton).

What Did Stensola et al Find?

The paper is somewhat complex, but the essential finding is straightforward and illustrated in the figure below. (the histology at left is a para-sagital section anterior left and entorhinal cortex along the posterior wall of the cerebral hemisphere, coded in red). The plot on the right shows the first essential finding. Rather than having grid scale distribute continuously, grid size increased in discrete steps. In addition, for this rat, the orientation of the grid axes remained fairly constant, independent of scale.

Among the large unanswered questions is how the modules operate. If a module is a processing unit, how are the connections within module implemented and what function do they perform? In a similar fashion, how are different modules interconnected? Exploring patterns of connectivity within entorhinal cortex would address these issues. With such data in hand we may begin to understand the neuronal computations that underly navigation and other complex cognitive functions.